Why are Estonian mushroom scientists among the best in the world?

Estonia became the world’s centre of mycology against all odds.

Around every fifth person in Tartu, Estonia’s second largest city, is a student. The life revolves around the University of Tartu, one of the oldest universities in Northern and Eastern Europe, founded in 1632.

This small riverside town hosts some of the brightest minds in modern mycology, a scientific study of fungi. Fungi refers to organisms like molds, rusts, mildews, smuts, mushrooms, and yeasts.

Nine Estonian scientists were listed among the top 1% of most cited scientists in the world by Clarivate Analytics at the end of 2019. Other Baltic and Polish scientists combined are not as visible as Estonians.

Even more surprisingly, seven out of nine of those outstanding Estonian researchers – in one way or another – work in the field of mycology.

“You could say we are one of the centres of the world when it comes to mycology,” said Urmas Kõljalg, one of the most influential researchers listed. 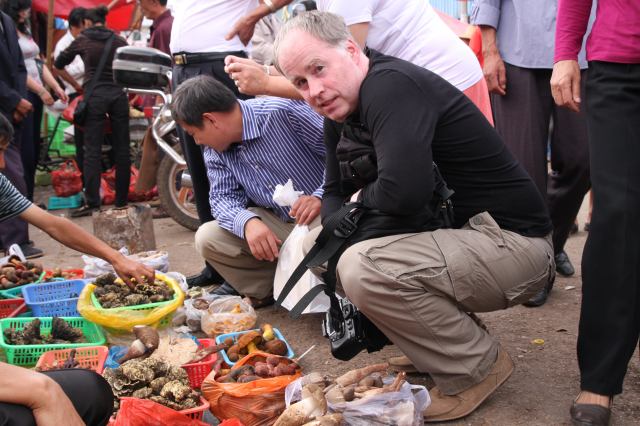 No doubt, Estonia now belongs to the ten percent of the most influential and efficient countries in the scientific world, said Jüri Allik, an Estonian scientist, who has been observing and analysing the Estonian scientists’ success story for years. Only a very few post-Soviet countries like Estonia and Georgia have achieved that.

Biology conference organisers want to raise the bar by including Estonian names on the speakers’ list. Scientists from all over the world ask them to review and correct their articles, so that the Estonian names could also be added as co-authors. This would increase their visibility and help them get published in higher-rated magazines.

“Everything is more amplified for us now,” said Leho Tedersoo, another top Estonian mycologist. “I get the most requests from Chinese scientists.” 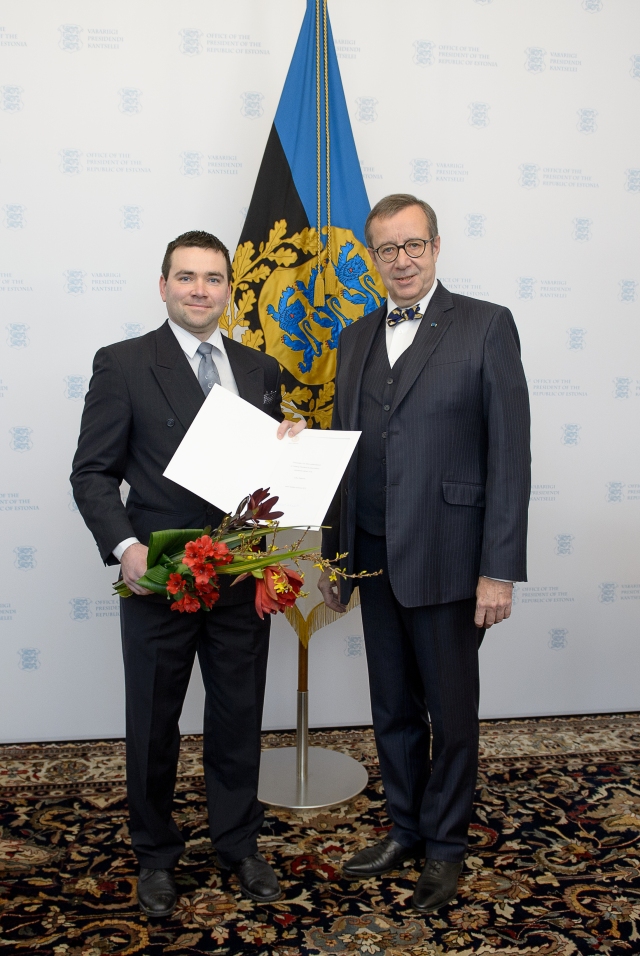 Mycologist Leho Tedersoo receiving the Young Scientist Award from the president of Estonia, Toomas Hendrik Ilves, in 2016. Photo Credit: President Office of the Republic of Estonia

Staff at Arab universities want to hire them, so that the names of their institutions would appear next to the top published scientists’ names.

The scientific world is extremely competitive, but the Estonian mycologists stick together and support each other.

They were around four to five researchers and students, who used to meet in bars after work. Over the years, the group grew into around 20 fungi enthusiasts, who meet bi-weekly and share their knowledge and ideas.

“Of all the things, I am the proudest of, it is the little community we have created,” Kõljalg said.

Reaching the West during Soviet times

What makes this success story even more remarkable is that the local biologists survived the Soviet oppression of half a century, when there was pressure to publish scientific papers mainly in Russian, as English was forbidden and access to the top Western science was very limited.

And mycology is not a niche field by any means. Fungi are the second most species-rich organism group after insects. Their importance and visibility are growing fast as laboratories are looking for fossil fuel replacements. Creating bioplastics, biofuels, pharmaceuticals and other natural products requires fungi.

The study of fungi will become essential for future generations. It provides the most tangible hope for real change towards green economy.

Mushrooms hold the key to many secrets of nature.

And Estonia’s story illustrates how top science can originate even under the most difficult circumstances against all odds.

The first scanty data on Estonian fungi were published in 1777, but the modern scientific mycology started in the middle of the deepest Soviet times by the “grand old man of mushrooms” Erast Parmasto.

He used Latin language to bypass the authorities and create connections with free world’s scientists. In 1968 he published a monograph in Latin titled “Conspectus Systematis Corticiacearum”. This defined a new group of fungi and worked like a spark in a haystack in the world of mycology. Western scientists were curious to know what was being done within the Soviet Union. Parmasto’s article provided a window into the hidden world.

Many scientists then reached out to him and he continued the correspondence for many years, often sharing the latest discoveries with his students before they were even published anywhere, as recalls his first PhD student, Urmas Kõljalg.

The love for nature and nationalism went hand in hand in Estonia. For instance, Lahemaa Rahvuspark, established in 1971 in Estonia, was the very first national park in all of the Soviet Union, despite the fact that the central government did not recognize the word “national”. Terms like “reservations” or “protected area” were preferred to “national park”. But Estonians insisted and overcame.

In the summer of 1989, a European Mycology Congress was held in Estonia. It was right around when the Baltic Way was formed. It was a unique human chain stretching from Tallinn to Vilnius where people held hands to show their desire for freedom. The international mycologists, who came to attend the congress, also joined the human chain.

Parmasto was a charismatic and extremely inspiring scientist who liked to spend most of his free time making observations in the forest. The current most cited mycologists – Urmas Kõljalg, Kessy Abarenkov and Leho Tedersoo come from a direct line of his teachings.

Parmasto knew another well-known academic – Endel Lippmaa, who arranged for him and his students to have personal computers. This was unheard of in the 1980s. Kõljalg still remembers his first Apple computer nowadays. He got his first email address by the end of the 80s, which was remarkable for the time, under the Soviet rule.

IT and mycology then got intertwined in Estonia and things really kicked off.

Estonia regained its freedom in 1991.

Kõljalg went to Gothenburg, Sweden to do his postdoctoral. He used some of his funding to purchase laboratory equipment and brought them with him back to Estonia in bags. His students could use the Swedish laboratories where they sent the samples.

The next generation was coming up. Around the change of the century, when Tedersoo came to study mycology, molecular methods were implemented.

The first DNA-based digital database was created that later grew into UNITE, which is now one of the best-known databases for fungi, and used by top mushroom scientists all over the world. Most users come from China, the US, Japan, Germany and the UK. After almost twenty years of work, Kõljalg and Abarenkov received Estonia’s most prestigious science award this year for their work.

Databases matter in mycology. There are around four to five million species of fungi in the world and over 90 percent is still not described. How can we develop something if we don’t know enough about it? This database aims to fill the gap and map all the fungi in the world.

There are around four to five million species of fungi in the world. Photo credit: Karl Ander Adami

Poor in networking, strong in concentration

It’s difficult to get published in the world’s best scientific magazines and many scientists don’t even try. It’s often a matter of confidence and networking, Tedersoo said, but also knowing the right keywords and people. Estonian mycologists are not good with small talk, but they make up for it with their concentration and IT skills.

He is also quite fearless when it comes to collecting samples.

In 2007, he showed how green plants can steal energy with the help of mushrooms. This was a change of paradigm for mycology. In 2014, Tedersoo published a global research for which he spent a year travelling the world, collecting mushrooms. It was published in Science and revealed the staggering and previously unknown diversity of species.

Tedersoo risked his life to get this article published. In Northern Brazil, he ended up in a mafia-controlled area where the police stopped him. That’s why Tedersoo always carries a roll of toilet paper and binoculars with him to have as an excuse for stopping by the road in case authorities question him. The story of being a fungi scientist may not sound believable enough. 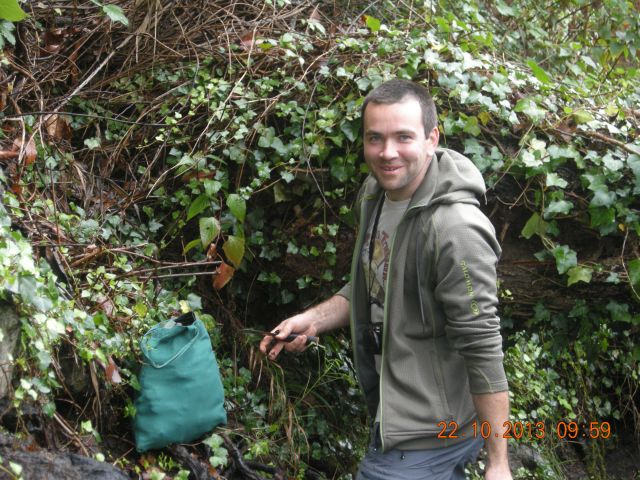 It’s sometimes difficult to explain to the local authorities what he is doing alone in a forest when Tedersoo collects his samples. Photo credit: Kristi Pärn

Being amongst leading scientists is like being a top athlete. “It’s about constant training, competition and pushing your limits,” Tedersoo said.

The hard work has certainly paid off.

This article was funded by the European Regional Development Fund through Estonian Research Council.

Like Loading...
This entry was posted in Other news and tagged Estonia, Kessy Abarenkov, Leho Tedersoo, mycoecology, mycorrhiza, Urmas Kõljalg. Bookmark the permalink.

1 Response to Why are Estonian mushroom scientists among the best in the world?