Simulated islands help to untangle the secrets of biodiversity

Volcanic islands emerge empty from the sea and thus, offer a unique change to study how plant- and animal species colonize new areas. They have been in the focus on interest of biogeographers for centuries and are known as hotspots for biodiversity as well as for extinctions. Unfortunately, even several centuries are a time too short to observe evolution and dispersal processes in live. That often makes difficult to study the mechanisms behind the curious patterns of island biodiversity.

Computer simulations, which allow us to emulate the possible processes responsible for insular biodiversity development, might come in handy in this situation. Scientist of the macroecology workgroup in University of Tartu Madli Jõks and Meelis Pärtel used a computer simulation to study the plant communities of Hawaii, Galapagos, Canary Islands, Azores and Cape Verde. Their aim was to understand, which factors design species richness and composition on the islands: is it mainly island area, habitat diversity or the position in the archipelago?

The aim was approached by altering archipelago maps to create realistic and less realistic situations in which island biodiversity might have developed during the millions of years. These maps were then used as arena for simulations which emulated immigration and dispersal processes, as well as competition between the species, evolution and extinction. As these simulations are more than an ordinary computer can handle, the help of the High Performance Computing Centre of the University of Tartu was used.

It became apparent that the results were more realistic when the virtual islands contained many different habitats; scenarios where the islands were covered with one consistent habitat didn’t give results quite as accurate. From the results, it can be concluded that the diversity of the habitats has been a more important factor of island biodiversity than had been previously assumed.

To test the importance of the spatial configuration of islands, simulations with randomly relocated islands were used. The right positioning of the islands was found to be important for getting a realistic composition of species only in more elongated archipelagos: in Hawaii, Azores and Canary Islands. That also makes perfect sense: when the configuration of islands is randomly changed in an elongated archipelago, the islands are likely to be further away from their actual neighbours, and islands which were initially further away will become their new neighbours.

But why study oceanic islands in Estonia? Islands, especially oceanic islands, are primarily great model systems. Knowledge about how species disperse between habitat fragments or diverge due to geographic barriers can be applied to the study and protection of other island-like communities, e.g., patches of forest left between clear-cut areas. 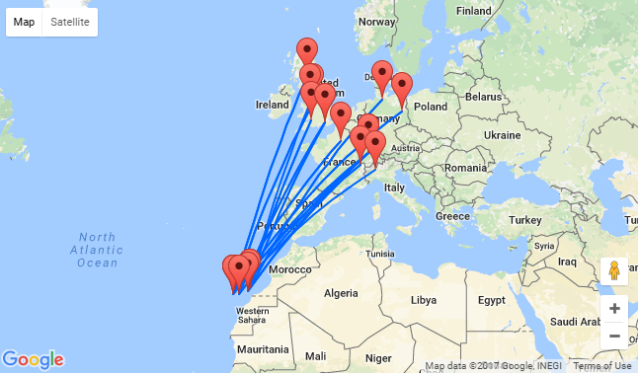 Although islands as natural laboratories have held the attention of scientists for centuries, they continue to offer new study questions, especially in the context of the current biodiversity crisis. To date, habitat diversity on islands and spatial configuration of archipelagos have received less attention than classical island area and isolation. Moreover, in the field where experiments are impossible, correlative methods have dominated, despite the call for more mechanistic approaches. We developed an agent‐based computer simulation to study the effect of habitat diversity and archipelago configuration on plant species richness and composition in five archipelagos worldwide (Hawaii, Galapagos, Canary Islands, Cape Verde and Azores) and compared simulated diversity patterns to the empirical data. Habitat diversity proved to be an important factor to achieve realistic simulation results in all five archipelagos, whereas spatial structure of archipelagos was important in more elongated archipelagos. In most cases, simulation results correlate stronger with spermatophyte than with pteridophyte data, which we suggest can be attributed to the different dispersal and evolution rates of the two species groups. Correlation strength between simulated and observed diversity also varied among archipelagos, suggesting that geological and biogeographic histories of archipelagos have affected the species richness and composition on the islands. Our study demonstrates that a relatively simple computer simulation involving just a few essential processes can largely emulate patterns of archipelagic species richness and composition and serve as a powerful additional method to complement empirical approaches.