Understanding which species establish in which habitats is fundamental to community ecology and to more applied pursuits, such as the restoration of degraded sites and the prevention of invasion by exotic species. Jonathan Bennett and Meelis Pärtel from macroecology workgroup of the University of Tartu developed a method that compares the characteristics of species across the regional species list, the site-specific species pool and locally observed species to predict which other species will be able to establish. As part of this method, we developed a new way to measure dissimilarity among species which we call functional neighborhood distances. Using this method in Estonian grasslands, we were able to predict approximately 50% of species establishment from seed, indicating that the new method may be a robust means to predict establishment and potentially invasion. 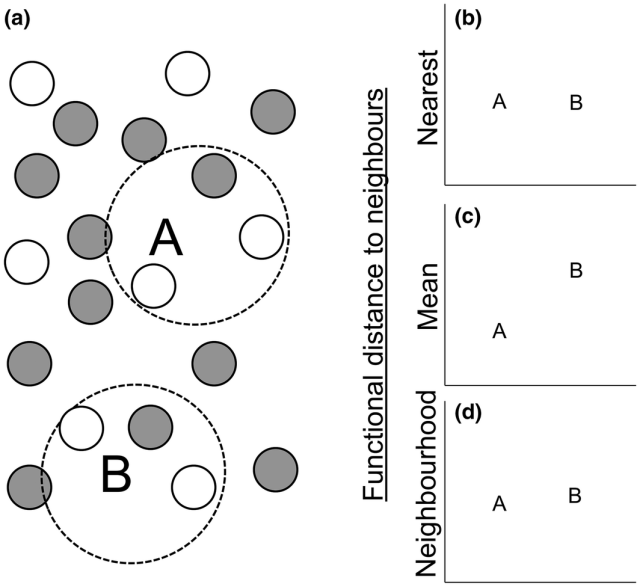 FIG 2 from the paper: A hypothetical example showing how different functional distance measures may affect our interpretation of establishment probabilities. Panel (a) shows the distribution of species in functional space, where gray circles represent biotically excluded species and white circles species present in the community. The letters A and B represent two potential colonists. Both species are similarly distant from their nearest neighbor (b). As species A is closer to the mean trait value for the observed community than species B, species B has a higher mean distance to species within the community than A (c). Using the mean distance to species within the functional neighborhood (dashed circles), there is little difference between species A and B (d)

Abstract:
Species establishment within a community depends on their interactions with the local environment and resident community. Such environmental and biotic filtering is frequently inferred from functional trait and phylogenetic patterns within communities; these patterns may also predict which additional species can establish. However, differentiating between environmental and biotic filtering can be challenging, which may complicate establishment predictions. Creating a habitat-specific species pool by identifying which absent species within the region can establish in the focal habitat allows us to isolate biotic filtering by modeling dissimilarity between the observed and biotically excluded species able to pass environmental filters. Similarly, modeling the dissimilarity between the habitat-specific species pool and the environmentally excluded species within the region can isolate local environmental filters. Combined, these models identify potentially successful phenotypes and why certain phenotypes were unsuccessful. Here, we present a framework that uses the functional dissimilarity among these groups in logistic models to predict establishment of additional species. This approach can use multivariate trait distances and phylogenetic information, but is most powerful when using individual traits and their interactions. It also requires an appropriate distance-based dissimilarity measure, yet the two most commonly used indices, nearest neighbor (one species) and mean pairwise (all species) distances, may inaccurately predict establishment. By iteratively increasing the number of species used to measure dissimilarity, a functional neighborhood can be chosen that maximizes the detection of underlying trait patterns. We tested this framework using two seed addition experiments in calcareous grasslands. Although the functional neighborhood size that best fits the community’s trait structure depended on the type of filtering considered, selecting these functional neighborhood sizes allowed our framework to predict up to 50% of the variation in actual establishment from seed. These results indicate that the proposed framework may be a powerful tool for studying and predicting species establishment.
Advertisement